Offshore oil production systems are designed to operate in a steady-state regime; however, it is possible that this condition does not exist.

Since 2006, contributions have been made in the area of stability of multiphase flow. Traditionally, isothermal flow was considered. In this paper, the energy equation is included in the methodology.  Although the obtained results show that temperature variations have a secondary effect, it is worth taking into account in order to improve the accuracy of the stability maps.

Abstract: In this paper, a numerical study on the stationary state for the multiphase flow of oil in a pipeline-risers system in presented. The developed model considers that the flow is one-dimensional and three-phase throughout the system. The liquid and gas phases are considered compressible. Furthermore, it is assumed that oil and water have the same speed and are homogenized. The flow pattern in the pipeline and riser is determined based on the local state variables and inclination angle. The conservation equations were solved numerically using MATLAB software. For a constant separator pressure as boundary condition, the pressures calculated by the model with the thermal effects were higher than those obtained by the isothermal model. The average difference between them was 2.3%. The deviations ocurred due to the effect of temperature on the mass transfer, compressibility, expansion, and the thermophysical properties of the phases. The stationary analysis shows that the temperature has a secundary effect on the flow in offshore systems. However, deviations about the isothermal model must be taken into account in order to improve the reliability of numerial results and better production planning. 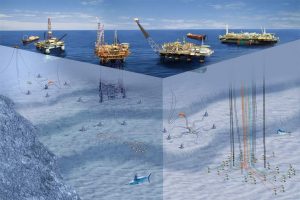